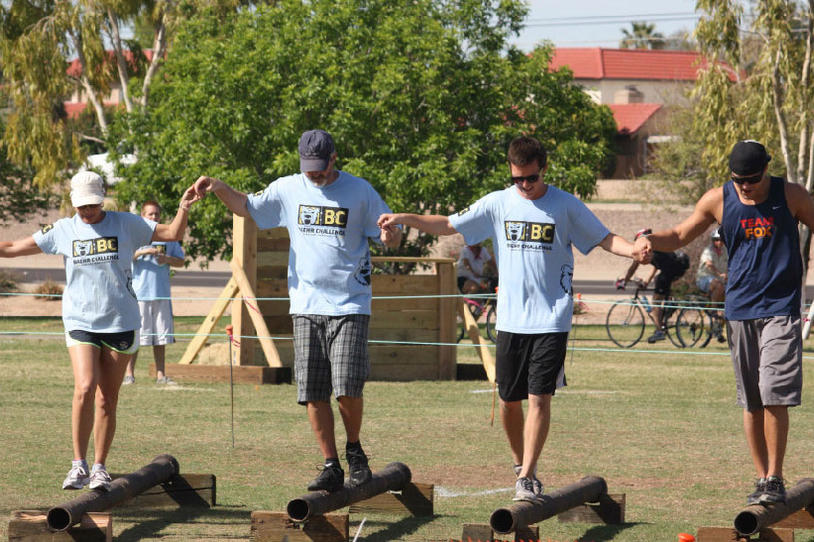 Team Fox Mentor and co-founder of the Baehr Challenge, Brian Baehr, offers us a glance at his life with Parkinson’s disease. See how fitness, fun and a positive attitude have improved Brian’s life.

My name is Brian Baehr and I have Parkinson’s disease.

In 2007, at the age of 47, I noticed a slight hand tremor and began to struggle with my hand writing. As I would write, my large, all-capital letters began to shrink leaving the last few words of each sentence illegible. I attributed it to stress (I had two sons in college and a third graduating high school) and the need for stronger reading glasses. I began to drop things that my wife handed me (why is she in such a hurry?) and found myself needing to focus to complete tasks that used to be automatic (I never was good at multi-tasking). I had no explanation for why my feet got heavy and my arms forgot to swing when I walked, so I scheduled an appointment with my family doctor.

I spent the next year being poked and prodded in the offices of several specialists who ruled out several diagnoses (brain tumor, MS, ALS), discovered and treated one disease (prostate cancer), and was told that I was not a likely candidate for Parkinson’s Disease at age 47 with no family history of such. Ironically, it was my urologist who first said “the P word” suggesting Parkinson’s disease due to recognizing similar symptoms in his own father who has PD. Soon thereafter I found my neurologist, Dr. Johan Samanta, who prescribed medication to treat my Parkinson’s-like symptoms. Almost immediately I began to feel better. Then came the anger.

I was fit, youthful and athletic. I was going to be the 70 year old who shot his age in a round of golf, stole bases in a senior baseball league, or tried for a record in the 100 meter dash. Why me?

My pity party was short-lived, poorly attended, and interrupted by my childhood friend, Don. He and I were on the golf course, and I was sharing my concerns about the future. Will I be able to work long enough to have a good retirement? How much longer will I be capable of providing for my family? After sharing my concerns, Don stopped me and said “What are you worried about? You’re lucky!” I looked at him and wondered where he was going. Don continued, “You’re going to make millions working at Home Depot as a paint shaker!!!” So began my new and improved outlook.

I decided to focus on living. Fitness was always very important to our family; we were always active. I play baseball and golf; my wife and I play tennis. We would often hike and bike with our sons, and had a dirt-worn whiffle ball field in our back yard for many years. Over the years my boys participated in baseball, football, wrestling, rugby and lacrosse.

In 2009 our eldest son, Matt, was a certified personal trainer and studying Business and Kinesiology at Arizona State University. He told me he had been researching PD and suggested I increase my exercise. Matt provided much guidance focusing on developing core strength for balance and stretching to reduce rigidity. I added yoga, some weight training, and swimming. I began to feel even better. I make it a priority to exercise on a daily basis and tell everybody I can about the benefits of exercise.

In April of 2011, I met a highly skilled acupuncturist and I began treatments. Over the past year I have become a fixture at the Eastern Medicine Center where I receive acupuncture treatments and Chinese herbal medicine. I consider Dr. Lui and her staff to be friends and part of my extended family. The trifecta of prescription medication, exercise, and acupuncture has me feeling better than I did when I was in my 40s and first diagnosed.

In January of 2010, Matt was the owner and operator of Spartan Boot Camps and wanted to get involved with the Michael J. Fox Foundation. He felt the MJFF was the leanest research-focused foundation. He informed his clients who helped promote a boot camp event dedicating the proceeds to the Michael J. Fox Foundation. Of course my wife and I attended the event where I was instantly elevated to celebrity status among these young people, most of whom were in their twenties. I was truly moved by the kindness and generosity of these “kids” and gained a new perspective of “the entitlement generation.”

Riding the wave of momentum, Matt and I decided to try and create a larger impact. The first Baehr Challenge Boot Camp was held in April of 2010 and cleared $10,000 (in charitable contributions, to benefit research, etc.) for the MJFF. Nearly 100 people joined us for a morning of fitness, education and awareness. My family, coworkers, employer, business relationships and friends were instrumental in our success.

The 2nd Baehr Challenge in April 2011 raised over 12,000 recession dollars that went directly to the MJFF. A team-based obstacle course and optional one-mile run was added to the event. Young men from an ASU fraternity and players from the rugby team worked tirelessly to construct obstacles and provided valuable event-day manpower. This year on April 22nd the 3rd Baehr Challenge will be held promising even more exciting obstacles.

The recent addition of new friends from the Muhammad Ali Parkinson Center has been an increased blessing. We are proud to be associated with those who raise awareness, provide care, and search for a cure for Parkinson’s disease.

I am grateful for my entire family, coworkers, doctors, and network of friends who provide so much support. Most importantly, I am grateful for my wife Kaye as I trek through this journey. Her sense of humor has kept me smiling and her “can do” attitude has held me up at points along the path when I otherwise might have faltered.

We all have obstacles to overcome. Perhaps I will be able to shoot my age on the golf course or steal a few bases at the age of 70.

Perhaps the Baehr Challenge will play a role in assisting the Michael J Fox Foundation to find a cure.

Perhaps…I could even open a Martini Bar!